Boss Design is a leading furniture manufacturer designing innovative solutions for the world’s workspaces. From task chairs, breakout and collaboration, meeting and conference and work café seating, to media units and office pods 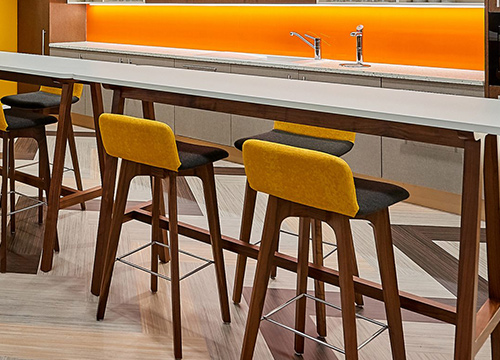 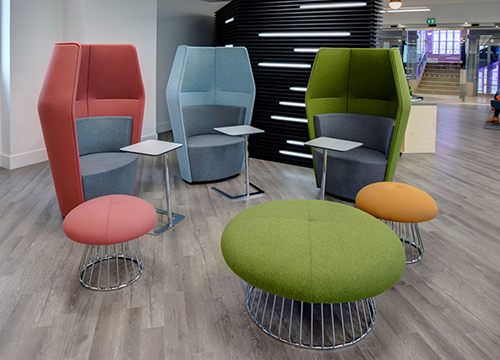 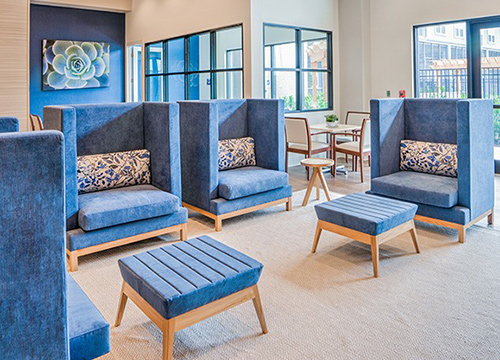 Boss Group implemented SYSPRO in order to radically overhaul and improve operations. Moving to a lean manufacturing environment and scaling up the business has meant an 18% year on year growth all while improving delivery and reducing costs.

As many manufacturers have found, a focus on product design cannot sustain success on its own. With growth comes business complexity, a massive increase in the need for information and ‘intelligence’, and heightened customer expectations, all which have to be managed effectively if the business is not to flounder. In effect, design capabilities have to be matched by business and manufacturing efficiency, if the full benefits of product leadership are to be gained.

One business that has recently been through this learning curve, and which has come out on top as a leading UK manufacturer of contract seating, is the Boss Group. Boss Design, the group’s founding company, is now at the cutting edge of British design, offering both a comprehensive range of ‘designed’ seating collections, which encompasses all aspects of the office, hotel and conference market, and bespoke product design. Many of its clients are architects and international blue chip organisations.

This latest success of both companies, which have their own manufacturing and sales operations, is in part due to an extensive change programme undertaken over the past few years, and driven by the recognition of the need to raise the standard of their operational and manufacturing practices to the level of their product offering. One of the most important steps in this programme has been the introduction of a SYSPRO ERP system from Manchester based K3 Syspro (K3).

As Virginia Seaward, the group’s Head of Operations, explains, “Through the implementation and development of SYSPRO throughout the group, we have been able to radically overhaul and improve operations, including a move to a lean manufacturing environment, and really ‘scale up’ the business. As a result, we have been able to cope with an 18% year on year growth, while still improving delivery, and reducing costs and inventory.” She adds, “Without SYSPRO we never would have coped.”

Boss has been operating its 35-seat SYSPRO system – covering financial and manufacturing and distribution modules – since 2002, and this has been recently updated to the latest SYSPRO 6.1 version.

The system covers both production sites, which are run independently, but there is one finance department, and both site’s systems are networked. Prior to that both operations relied on a mixture of PC packages for accounting and sales and manual production control systems. “It was like working in a time warp,” remarks Seaward. “These old systems may have served their basic purpose, the businesses could sell and purchase – but the manipulation of the data behind them was nonexistent. Therefore, all that we could do was print the paperwork off, hope the order was right and try to get the furniture out and delivered as best we could,” she adds.

For example, the group is very customer centric and offers a huge number of product permutations, covering different chair bases, arms, materials, and including 5000 different fabric and colour variations. Yet, despite the importance of the front-end order processing to both businesses, the previous sales system simply recorded sales details and provided no real support. Ensuring that orders were taken correctly and could be configured as required was down to the sales staff. But, with so many options, it was not uncommon for mistakes to occur. Similarly, both factories essentially assemble to order, with a range of delivery responses depending on the products required. Yet, previously, with little effective shop floor planning, different production sections tended to determine their own work plans, and this would mean that they could easily be working on different orders. As a result, lead times were too long, and waste was too high.

However, both business operations have now been literally transformed thanks to the carefully planned implementation and development of the ERP system.

Crucially, with the group lacking many key processes, the introduction of SYSPRO has been used to push though important changes. In many instances this has meant re-organising in line with the system’s processes and required practices. SYSPRO has also been used as the foundation for previously non-existent IT solutions such as a Quality Management System. As Seaward observes, “When we bought in SYSPRO we were essentially starting with a clean sheet of paper in many areas. But even in departments where we had some controls, we decided to start afresh. For instance, we transferred nothing from the old accounts systems, so that we didn’t bring over any bad habits.”

With such wide sweeping changes, SYSPRO’s implementation was far more than just the introduction of an IT package, but the development of a whole new way of working. As a result, there were initially plenty of concerns, and many ‘not done it this way before’ issues. But, to ensure it would get the best out of the system, Boss took great care to match the introduction with ample training and communications.

“We realised that the change over would be a real strain, and so we took around 12 months to set up the system and the new processes, and prepare everyone. But this approach quickly paid off, and within a few months of it going live, everyone was very comfortable with the changes and ‘loving’ the system,” reports Seaward. She continues, “During this preparation, and subsequently, we have had great support from K3. They understood our situation and have made every effort to guide and check our progress.”

But, the initial implementation is only part of the transformation. Having got the core system in place, and understanding their needs better, Boss has subsequently spent the intervening years using the flexibility of the system to push and stretch it to better suit its requirements. This effort is now being focused through a SYSPRO committee, through which users are now seeing their ideas put into place. As Seaward confirms, “Even now, three years down the line, we are still going through a massive learning curve, but that is because we decided not to just settle for the package as it was implemented, but to keep challenging our business.

Having established a solid business foundation, and effective management and control systems, Boss is now seeing a significant return for its efforts. For both businesses, SYSPRO’s sales order processing and Product Configurator modules have had a major impact, having eliminated a major source of wastage and mistakes. While throughout the operations, processes are under better control. In particular, the independent satellite systems, typically spreadsheets that people had developed for their own use, have been almost entirely replaced, as ways have been found for SYSPRO to undertake the task or produce the necessary reports. As result everyone is now operating from the same ‘hymn sheet’.

Also, the group is developing greater financial controls. Over the last 18 months, new triggers and events have been introduced to help investigate a whole range of issues from purchase price variations to clients exceeding credit limits. But, perhaps the biggest change has been in terms of production, where the new system is again providing both factories with the information needed to drive their increasingly lean environments, which are based around assembly to order, minimum WIP, limited on site raw materials stocks and on time delivery. “We have gained production visibility and control through the ready access to accurate information, and we are now using this to better orchestrate the whole manufacturing process in both factories,” states Seaward.

For example, the MRP functionality is now used to drive the purchasing of all raw materials, wooden frames, metalwork and componentary, and reports based on the originating Master Production Schedule also provide a forward view of overall capacity requirements. This enables production management to work around any upcoming capacity bottlenecks, by redeploying the multi-skilled operators as appropriate. Product kitting has also been introduced, which is undertaken up to 10 days prior to final assembly, and this now provides advance warning of any shortages.

To actually plan final assembly, Boss has again used the report writing capabilities of SYSPRO. The group has a fixed delivery pattern to different geographical areas, and SYSPRO now automatically produces a dispatch log detailing which orders are to be dispatched on which day. Working back from this data, the planning reports and work too lists are produced, which schedules work so that final assembly occurs just 1 to 2 days prior to an orders dispatch. “Everyone now knows what they’re supposed to have ready, and when – it’s brilliant,” notes Seaward.

With the ability to plan, the group is now moving towards a general 4-week lead-time. Although, some ‘standard’ products do have a 2-week turnaround. It has also introduced a rapid response, 7-day delivery for key customers. This is based around another SYSPRO generated ‘report’, which instead of working out dispatch based on geography, works to delivery date, and from this report planners prioritises these orders through production.

As Seaward reports, “By almost eliminating order mistakes and combining this with vastly improved visibility of demand and the ability to effectively schedule work, we have seen lead times come down, there is much less waste – both in terms of manpower and material – and improved customer service is being constantly improved, all while still achieving massive growth.”

The present achievements have not dampened the Group’s enthusiasm for further system development. The latest move has been to give sales representatives access on their laptops to sales order query data, via a VPN service, and the remote access may be extended to customers. In production, the forward march of progress will next see the introduction of SFDC.

Seaward concludes, “If you look back over three years it is amazing how far we have come, and much of this is due to the introduction of SYSPRO. While the core system has provided a solid business foundation, its flexibility has also meant that we have been able to move beyond the standard package and processes, and find ways to continually adapt it to meet our needs. And, we have no intention of stopping now. We have still got a lot of development work to do, especially with users continually questioning things and looking for better ways, and these will help further enhance the business and improve our performance.” 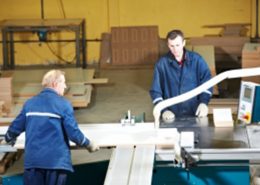 That’s the message from K3 Syspro at a time when, despite an increase in turnover of 11% over the last four years, Britain’s furniture manufacturers now face the challenge of filling thousands of vacant positions and recovering from £10 billion worth of missed opportunities and rising wages; a figure cited by PwC. 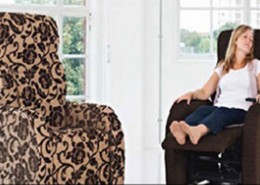